Like many people, I was amazed to wake up to the news that Donald Trump was close to winning the US Presidential election. As the day has gone on the final result is gradually sinking in.  I’m a big fan of Hillary Clinton and wrote my dissertation on her transformation of the role of First Lady, so I was particularly disappointed by the result.

Not least because one of my main sources of US election news the New York Times Facebook Messenger bot, had updated me daily with the chances of Hillary Clinton winning, and not once did it drop below an 86% chance she would be victorious. 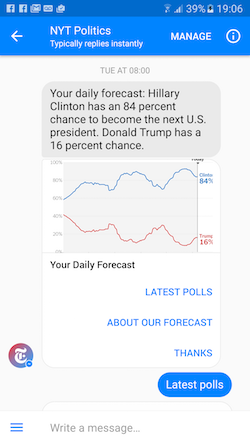 However you’ve kept up to date with election news – in print, online, or via new technology – the polls were largely wrong.  I think the model the New York Times has used to reach people is really interesting. Social media has changed the way we consume news, it’s a long time since people favoured one paper, bought a daily copy and read it from cover to cover.  These days we get our news from multiple sources and in a variety of ways.

Twitter was a key channel on election night, with millions of tweets sent as the results came in. But it is becoming increasingly hard for publishers to make their content stand out among all the noise on social media.  The use of Facebook Messenger is one way to overcome this.  By signing up for the New York Times bot, I received daily updates with notifications. Had I liked their Facebook page I would only have seen a fraction of the content I did.

I liked the fact that I only got updates on a particular subject area.  I think we’ll see far more of this type of publishing in future, tailored to our individual interests, and in this way news organisations can reach more of their potential audience.  Sadly it can’t change the election result for this year.