Do I need a new social media channel? 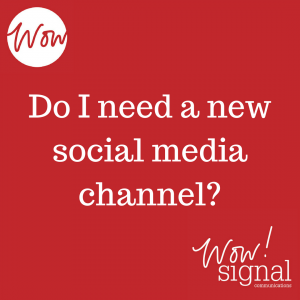 My 11 year-old son, a keen and sensible youtuber asked me a question last night –

“I want to start a second youtube channel, can you set it up for me?”

It’s a common theme on training courses I deliver and for clients – I often get asked to set up new channels, or if new ones are a good idea. And my response is the same as I gave my son.

Do you have a separate audience you are trying to reach?

Are your target audience using social media channels that you aren’t currently? If not, then why do you need a new channel? It is far better to put your efforts into building the one you have through engaging content that informs, educates or entertains and use networking hours and hashtags effectively.

There are often valid reasons to set up different social media channels. I used to work for the Environment Agency and they have a range of channels, particularly on Twitter. They maintain a national twitter account @EnvAgency as well as regional accounts such as my local one @EnvAgencyMids. The content varies on those channels – the regional accounts carry information only really of interest to local people for example flood warnings. Move to another level and you have well-followed staff such as @TrevorRenalsEA who have an interest in either local or specialised issues; in Trevor’s case it’s invasive plant species. Each account has its own specific audience. Trevor’s detailed look at invasive non-native species is perfect for other specialists in that field, but wouldn’t suit the national account that covers a huge range of subjects and a wide geographical area. Sometimes the national and regional accounts retweet content from individuals and vice versa. During #invasivesweek the content did overlap to broaden the reach of messages about non-native species. The Environment Agency accounts are all captured in this Twitter list if you want to have a look through and see how they do it.

Do you have enough content for an additional channel?

Another important question to ask yourself is – do you have enough content to satisfy a second channel? This is particularly important if you’re struggling with content for the channels that you already have. Do you have enough to sustain it for the future? You need to be able to regularly service all your channels and keep the information fresh and interesting. As technology develops, it’s always tempting to jump into a new channel, without thinking about what you’d use it for.

So in many cases, as I told my son, the answer is unless you’ve got something different to say to different people – ‘build on what you have and do it well’.  He doesn’t have a discrete audience for another account and sometimes struggles to know what to post on his current account. But as he’s 11 and his mum has advised him to do one thing, obviously he’s ignored me and now has two youtube channels!

1 – What is my overall objective, whether it is leads or sales for a business, communicating with the public for a government agency, or engaging supports for a charity – your social media activity should support your work and aims.

2 – How are my current channels performing?  This can help you to decide whether to add new ones, replace one or more of them, or stick with what you’ve got.

3 – Who is my target audience and where do they spend their time? You need to go to where your audience are and communicate with them there, rather than expect them to come and find you.

4 – Do I have enough content to sustain another channel?

5 – Do I have the right sort of content to sustain another channel? If not, do you have the budget or resources to create the right content?