A dog’s dinner of a crisis response

The Twitter sentiment score from Topsy is just 14% positive from over 3000 tweets a day on the topic of Crufts.

Compared to the sentiment over the last 30 days of 70% positive it’s clear their reputation is taking a hit.

So, how are they handling it on Twitter? To be honest it’s a dog’s dinner. These are all the tweets they’ve sent from @KCLovesDogs since the end of the competition. 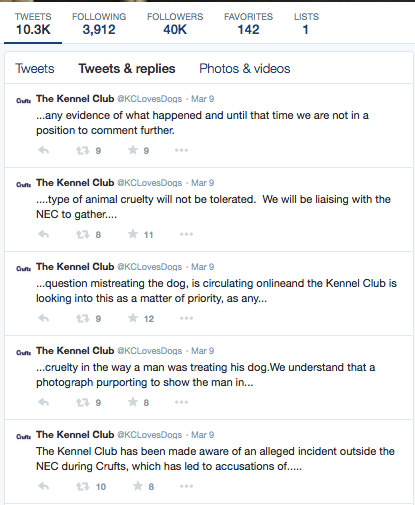 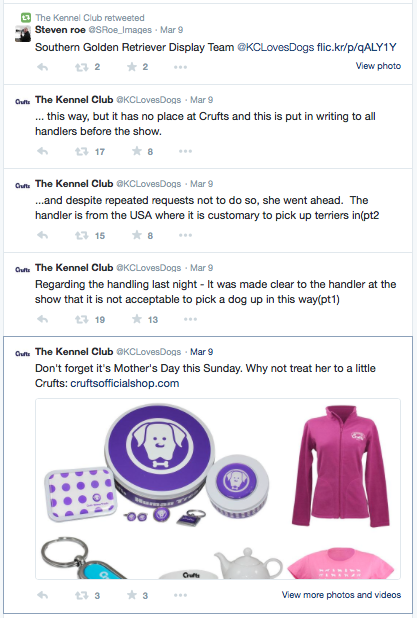 Surely one tweet with a link to the full statement on their website would have been more effective and much easier for other people to share.

The Mother’s Day tweet that precedes them is yet another example of the dangers of scheduling tweets and not thinking to delete them if circumstances change.

Since then silence! An advanced Twitter search for tweets sent to @KCLovesDogs shows lots and lots of people asking them questions (some polite, some not worthy of a response), criticising them, and wondering what is going on.

In the absence of information from the Kennel Club, people have started creating and sharing their own material, their own stories about what happened, and they are spreading all over social media, without proper explanations or rebuttals. There is nothing for dog lovers to counter stories with, even if they wanted to show their support for Crufts. 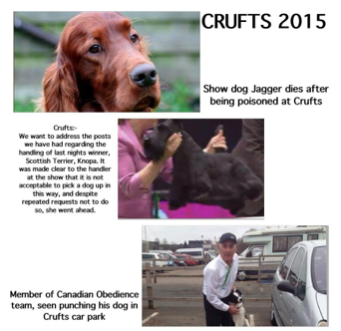 The good ingredients of a crisis response include: regular updates, taking control of the situation and clearly demonstrating that you have, monitoring closely what is being said, myth busting, responding to reasonable questions, allowing your supporters to help you, and continuing those efforts for as long as it takes for the crisis to end and for your reputation to be either protected or rebuilt.

Perhaps there really isn’t anything else the Kennel Club can say, maybe things are as bad as others are making out, but I’m sure there are some updates, some responses, some engagement that could be made before their sentiment score drops into single figures.

Literally as I did a final check to see if there had been any further Twitter activity I spotted these, again presumably automated tweets, to web articles about how to support the Kennel Club and access their grants! 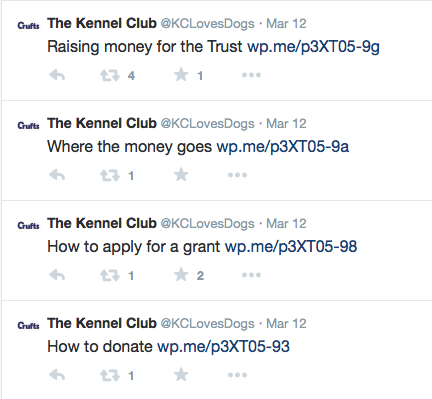 No Best in Show win for @KCLovesDogs! Definitely must do better.